I Believe, Help My Unbelief

There is great power in words. Do you prayers start off like this? "Dear Lord, if you can..." or "Heavenly Father if you will..."


Take a look at Mark 9:18-27. Jesus encounters the boy with an evil spirit. It was in such control of his body that it would often throw him into fire and into water trying to destroy him. The spirit had robbed his son of his speech, and caused him to have seizures.

The boy's father was so distressed and broken for his child. The disciples had tried to heal the son and couldn't. The father had tried to believe for so long, He says to Jesus, "If you can do anything, take pity on us and help us."

Ever felt like that? I must admit, similar words have come out of my mouth. And until today, I never really thought about how those words of doubt not only affect the results of my prayers, but also how it sorrows the heart of my Heavenly Father.

The father follows up by saying, "I believe, help my unbelief." 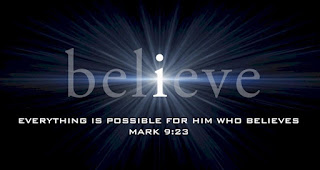 I've always looked at that statement being about the father's belief, but what if it was about the power Jesus' belief? Jesus was the one doing the healing and He was MORE than confident in His ability to heal the boy. The father even admitted his own insecurity in belief.

Many times we start our prayers in unbelief..."If you can God..." The power of doubt starts our prayers off in the negative so to speak. Then we get into this mind game... similar to the father who said, "I believe, help my unbelief," where we aren't really sure about our own faith. And then, if WE don't have enough faith, then God somehow won't answer and do the thing that needs to be done.

Quit beating yourself up over your own lack of faith. Jesus can move and He will move according to His perfect will. Claim HIS belief! Claim HIS power! Claim HIS words!

God's requirements are met by God's enabling, not our own.
Posted by Christina at 9:27 AM